When Dr. Julian Sanchez watches his one-year-old twin sons start walking and slowly exploring the world around them, it hits him just how amazing fatherhood is. Not just in general, but for him specifically.

The colorectal surgeon always knew he wanted to be a dad, but growing up gay in the 1980s, Sanchez assumed it was out of the realm of possibility.

No one had same-sex parents and the idea of two men raising children was weird by 1980s standards, Sanchez said. But everything changed in June 2019 when he and his husband, Stefan, welcomed twins Noah and Julian Peter into the world through surrogacy. Both boys are named after their parents’ fathers.

“It’s just so crazy how fast they grow,” Sanchez said. “They’re practicing their walking and have their hands all over the sofa. They’re getting close to fully walking.”

Sanchez and his husband had always hoped to have twins, even in the early stage of planning to be parents in 2016. They knew they wanted two children and having both at once was more financially responsible and less time consuming considering all of the preparation work needed to find both an appropriate egg donor and a proper surrogate.

“It took us two years to line up everybody to get this started, even with the help of an agency,” Sanchez said. “We went through eight egg donors before we found the right match. Our egg donor had to be an appropriate match both medically and personally. Once we met our egg donor, we knew she would be perfect.”

When the egg donor was finally confirmed, the eggs were fertilized and the embryos were placed on ice as the couple searched for a gestational carrier. After several interviews, they finally found the right woman to carry their twins.

“She’s a lovely woman who has two kids of her own,” Sanchez said of the surrogate. “She was so supportive and we visited her a lot through the pregnancy. We were involved in every doctor visit either through Zoom or in person and saw every ultrasound. It was amazing to be a part of that experience.”

The couple, who live in Tampa, wanted to have their children born in South Florida to be closer to Sanchez’s parents and to have that additional support. And while the men had a plan in place, they were surprised when they got a phone call four weeks earlier than expected announcing that their boys were on the way.

“We were actually with friends enjoying our last week of being childless,” Sanchez said. “When we got the call we rushed home, finished packing for our extended stay in South Florida, grabbed the dog and started driving.”

They made it in plenty of time and witnessed the arrival of the twins at a South Florida hospital.

“As soon as the babies were born they gave them to us,” Sanchez recalled. “It was all just so amazing to finally hold them.

The men were excited to finally have their children. But even with the help of Sanchez’s parents, the new fathers encountered sleepless nights and fears about whether they were doing things the correct way. Eventually the new family found its footing and after three months in South Florida, the family moved back to Tampa. 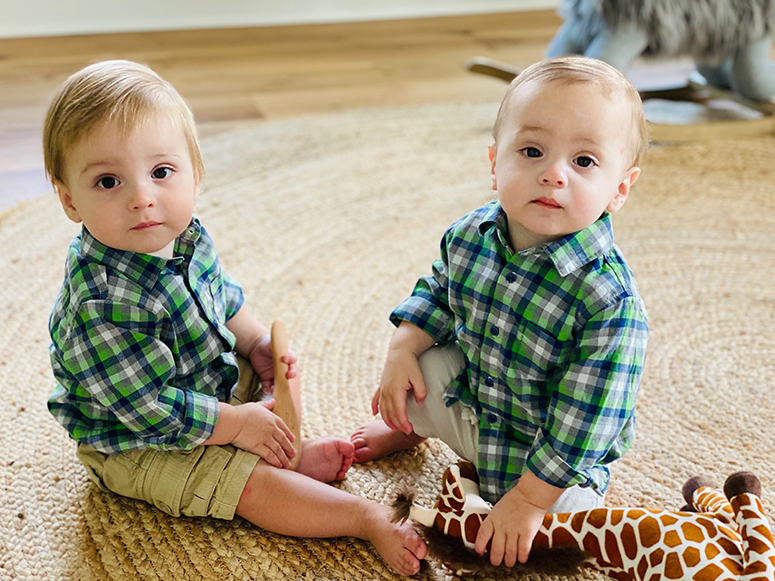 Watching the boys develop and grow has been the most rewarding part of the journey for the couple. And Sanchez said one of his biggest surprises about children is just how opinionated they can be at such a young age.

Sanchez and his husband have returned to work after extended leaves, and Sanchez is proud that Moffitt Cancer Center re-evaluated its parental leave plan when he noticed some concerns while planning his time off to be at home with his boys.

“When we decided to move forward with this, we both checked with our employers, who were incredibly supportive,” Sanchez said. “When I looked at Moffitt’s policies, I saw that they were different for men and women.”

Both were generous, Sanchez said, but different and not in line with gender equality. Women were allocated a month off for maternal leave, whether they gave birth to a child or adopted one. Men were given a week, regardless of the situation.

“Gender equality should fall both ways and I reached out to our administration and asked them to take a look at it,” he said. “After some discussions the policy was adjusted for equal parental leave.”

Sanchez said he understood that since the original parental leave policy was drafted, the definition of family evolved. Time off after becoming a parent is typically for bonding with the child or children, not necessarily for a mother to heal from delivery.

Now that both men have returned to work, they have carved out new routines that include the twins. The new fathers say they have fully embraced the roles and have not had any negative experiences with strangers noticing a family with two dads.

“There have been conversations, of course, but they’ve all been positive and educational,” Sanchez said.

He described a time he was running in his neighborhood with the twins in their jogging stroller and a woman stopping him and began talking about the twins. When she said something about dad giving mom a break for a while, Sanchez explained his situation.

“I told her that, no, I was giving the other dad the day off,” Sanchez said. “She was then apologetic for assuming things and we had the sweetest conversation. She was just trying to be friendly and I was trying to educate at the same time. Our goal is to not hide our family in a closet and show society in general that family comes in many forms. It’s all about communicating the right way.”

The couple also understands that by being so up front about their family allows other members of the LGBTQ community to see them as role models. It’s something they never considered, but are proud to hold that responsibility.

“People will come up to us and say, ‘Oh my God, twins and gay dads! My nephew is gay and he wants to have kids, how did you do it?’” Sanchez said.

It was a difficult place to be at first, Sanchez admits, mostly because he wasn’t sure about his own abilities as a parent.

“I didn’t know how to do this,” he said. “I thought women had an innate ability to take care of kids that men don’t have. That’s obviously not the case, but certainly it was on my mind during those first three sleepless months.

It bothered him so much that Sanchez talked to his sister, a mother, about his fears.

“She told me she was as scared as I was and that it’s just nature,” he said. “She said it doesn’t matter your gender, you figure it out.”

And it seems that his sister was right. Sanchez said that both he and his husband are very comfortable in their roles as dads and are excited to watch their sons grow.

“My hope is that they will grow up in a society that accepts them and that they are never put at a disadvantage for having two dads,” Sanchez said. “I don’t ever want to be the cause of anything like that in their life. We are grateful to have had the opportunity to have a family and are appreciative of all the help we had along the way from family, selfless donors and gestational carriers, friends, employers and medical teams. It certainly does take a village to raise, and in our case, have a child.”

How Can We Help?

We provide customized representation to ensure your rights are protected. Please contact us for a free consultation by submitting our contact request form below. If you need immediate assistance, please call us at (813) 731-4667
Contact Us